Uniswap’s [UNI] proposal to float its V3 deployment on the BNB Chain passed the “temperature check” on 22 January, with 80% of total votes cast in favor of the move.

🦄 We’re excited to share that our @0xPlasma proposal to deploy @Uniswap v3 on @BNBCHAIN has passed the “Temperature Check” with 20M votes “YES” and 6,495 $UNI voters (the biggest number for the whole Uniswap Governance History).
Moving forward to the final “Governance Proposal” pic.twitter.com/HoIJgY8mX1

The proposal, which was first published on 17 January, outlined Uniswap’s plan to deploy its V3 on the BNB Chain. The proposal highlighted several reasons for the proposed deployment, including the fact that BNB Chain’s growing user base provided a potential new market for v3.

Realistic or not, here’s Uniswap’s market cap in BTC’s terms

Battle of the Dexes

However, the intended deployment of v3 on the BNB Chain could pose a significant threat to PancakeSwap’s [CAKE] dominance on the network. PancakeSwap’s total value locked [TVL] on BNB Chain was $2.54 billion, representing a 49.39% share of the total TVL of $5.01 billion held on the chain.

For context, Uniswap v3, which was launched almost a year after PancakeSwap became operational, had a TVL of $2.71 billion at press time. It had been deployed on five blockchains in the same period, including Ethereum [ETH], Polygon [MATIC], Arbitrum, Optimism [OP], and Celo [CELO].

As a result of the several improvements that the V3 deployment introduced, the DEX saw an increased level of adoption among several decentralized finance (DeFi) users.

Moreover, increased user activity since its launch caused Uniswap to become the most active smart contract on the Ethereum network last year, per Token Terminal. Moreover, the amount of gas in the last year totaled $204.24 million, with 15.54 million transactions completed.

In a post published on Uniswap Governance Forum in December 2022, GFX Labs opined:

“Uniswap v3 is positioned to compete significantly with PancakeSwap.”

Uniswap v3 has already demonstrated its ability to capture a large market share, as seen by its takeover of a significant portion of the Polygon DEX market share by volume. This was confirmed by data from Dune Analytics. 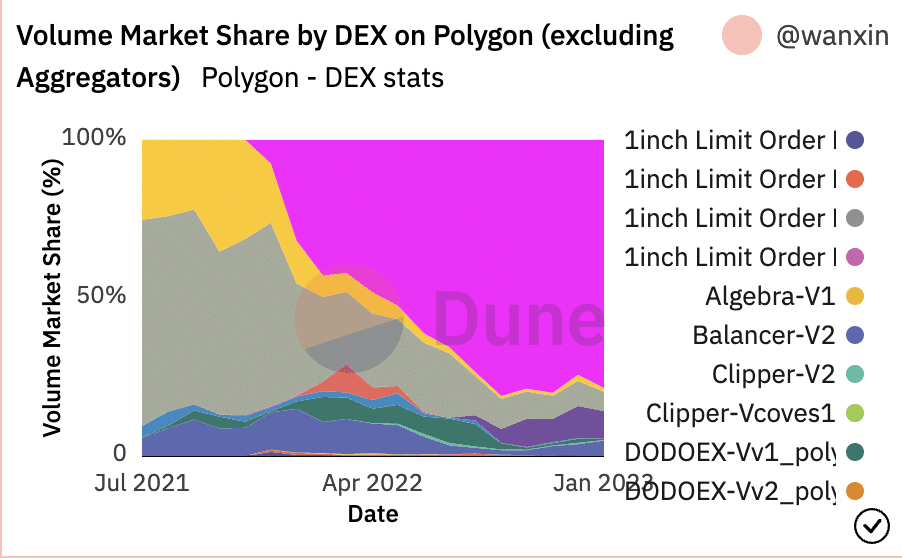 Specifically, Uniswap v3 held 80% of the market share at press time. Moreover, Quickswap’s market share dropped from 55% to less than 10% since Uniswap v3’s debut on Polygon in late 2021.

Bitcoin [BTC]: A tale of how short traders caused a price rally in January

Chainlink could lead dynamic NFTs in the future as LINK…

Facebook’s ‘Meta’ rebrand and how it can affect MANA & other...

Tesla, Blockstream, and Block to Mine Bitcoin Using Solar Power in...

Celebrate All Things Axie with an IRL Community Meetup Grant