New data provided by Token Terminal suggested that Polygon [MATIC] witnessed a significant increase in daily active addresses, ranking second after Binance Coin [BNB]. One potential reason for this increase could be Polygon’s presence in the DeFi space.

👥 Top 20 dapps & blockchains based on DAUs

Realistic or not, here’s MATIC’s market cap in BTC’s terms

Other DEXes, such as Uniswap [UNI], also launched on Polygon and benefited from this increased activity. Uniswap is one of the largest decentralized exchanges in the crypto space, and its presence on the Polygon network helped attract more users to the network.

In nine out of the 12 months in 2022, Uniswap recorded a month-over-month increase in trading volume, ending the year with an all-time high monthly volume of $3.91 billion. This showed that Uniswap and other DEXes on Polygon have been able to capture a significant market share in the DeFi space.

According to Dune Analytics, weekly volume per DEX on Polygon also increased during this period. Over the last three months, the volume for DEXes on Polygon grew from $277 million to $590.59 million. This indicated that the network was able to attract more users and traders to its ecosystem.

Due to the increase in DeFi activity, the number of unique addresses on Polygon also grew significantly. This was a positive sign as it suggested that the network was attracting new users and not just relying on existing ones.

However, despite the growing DeFi sector on Polygon, the volume for Polygon NFTs has continued to decline, according to Dune Analytics. 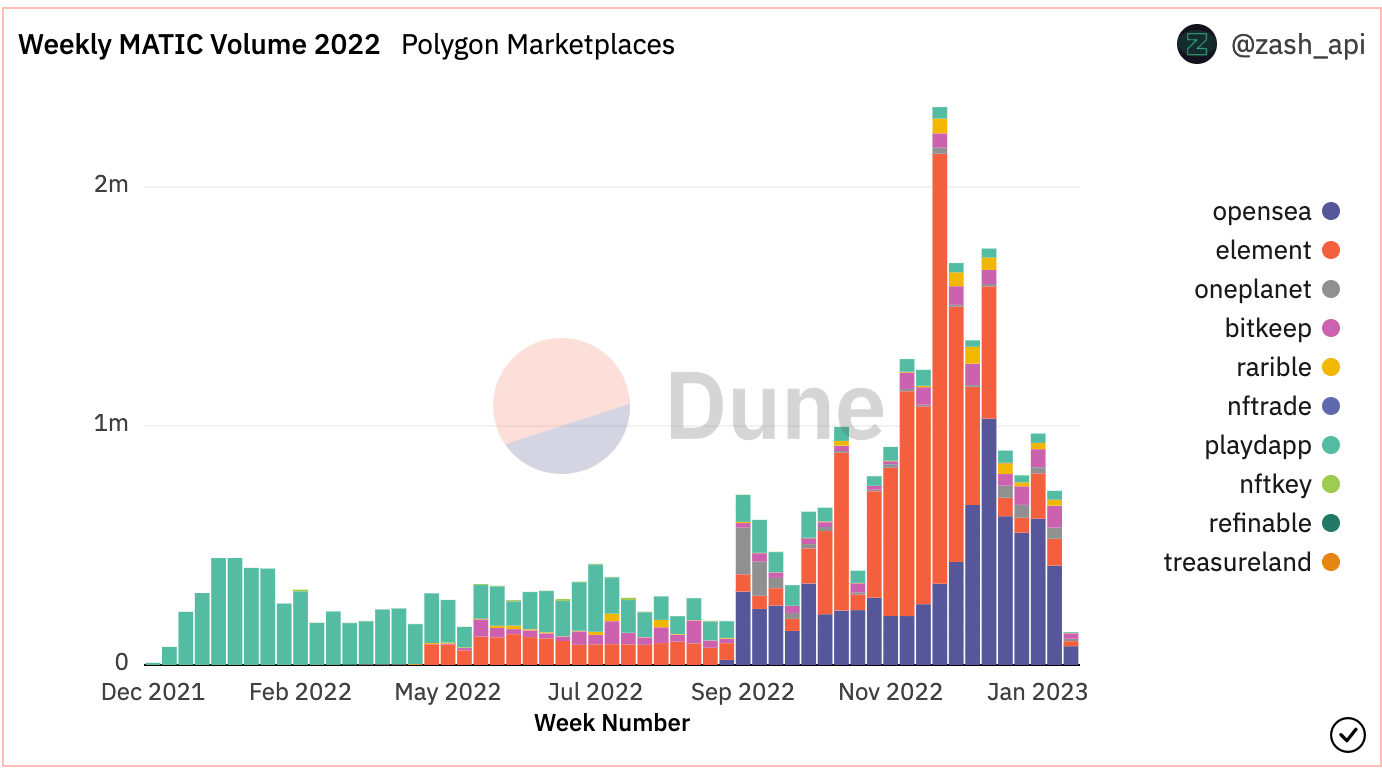 This decline in NFT interest paralleled a decrease in interest for the MATIC token.

According to Satniment’s data, network growth for MATIC has declined, suggesting that the number of new addresses transferring MATIC has reduced. Additionally, the volume for the MATIC token also fell from 125,000 to 45,000 in the last two weeks.

It is yet to be determined how MATIC will get affected by these factors. At press time, the price of MATIC was $1.01 after increasing by 1.26% in the last 24 hours, according to CoinMarketCap.

Bitcoin [BTC]: A tale of how short traders caused a price rally in January

Chainlink could lead dynamic NFTs in the future as LINK…

Are stablecoins giving Ethereum a run for its money? This new...

Monero: Watch out for this key development before taking a position

AAVE: Here’s why the token is in whales’ latest shopping list